What is Pest Management?

A pest species can be any species that humans consider undesirable. Any organism that reduces the availability, quality, or value of a human resource can be classified as a pest. This designation in no way reflects the organism’s role in the natural ecosystem but is more an indicator that they are in conflict with humans. Plant pests, also referred to as weeds, are included in the discussion of Non-native Invasive Plant Removal.

A pest in one area may not be considered a pest elsewhere. Often organisms rise to pest status because they escape normal control by natural regulating agents. This is achieved through direct or indirect importation to a new region or by human activities which reduce or eliminate the efficiency of their natural enemies. Without controls on population growth, organisms can rapidly achieve levels at which damage is caused thus becoming pests (e.g., locust swarms stripping landscapes bare). However, organisms do not need to exist in large numbers to be a pest. For example, the codling moth (Cydia pomonella) does not lay many eggs compared to many insects and often produces only one generation each year (Begon et al. 1996). However, because it blemishes apples, making them commercially undesirable, the codling moth is considered an important agricultural pest.

Methods of control can be categorized as chemical, biological, cultural, physical/mechanical, or genetic, and are discussed in further detail below.

Integrated Pest Management (IPM) is an increasingly popular process for controlling pests. IPM considers the ecosystem as a whole and takes into consideration a balanced mix of the aforementioned control methods to produce the most effective and least damaging plan. All the methods are mutually augmentative with chemical control means as the last resort in the plan. Ideally, an IPM plan would result in a sustainable system without need for much costly follow-up maintenance.

A number of insects and pathogens have been identified as pests particularly for their impacts to vineyards, orchards, and other agricultural industries important to Napa County’s economy. The following table presents a number of important pest species in Napa County as well as their deleterious effects. 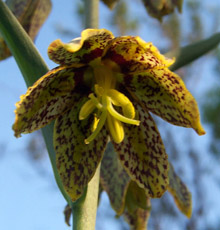