Groundwater is an important part of California’s – and the nation’s water supply.   Nationwide, groundwater makes up on average 26% of the water supply.  In California, that number is significantly higher – groundwater provides nearly 40% of the water used by California’s farms and cities, and significantly more in dry years.  But what is groundwater?  In this post based on the first segment of the UC Davis shortcourse on groundwater, Dr. Thomas Harter, who is the Robert M. Hagan Endowed Chair for Water Resources Management and Policy at the University of California, Davis as well as Professor and Cooperative Extension Specialist in the Department of Land, Air, and Water Resources (among many other things), provides a basic understanding of groundwater – what it is, how much groundwater is out there, how fast groundwater moves, and where it comes from and where it goes.

Dr. Harter began by likening a glass that was filled with red beans and water to groundwater.  The water that’s filling the spaces in between the beans is groundwater; the part of the beans that are above the water is called the unsaturated zone and the top of the water is the water table. 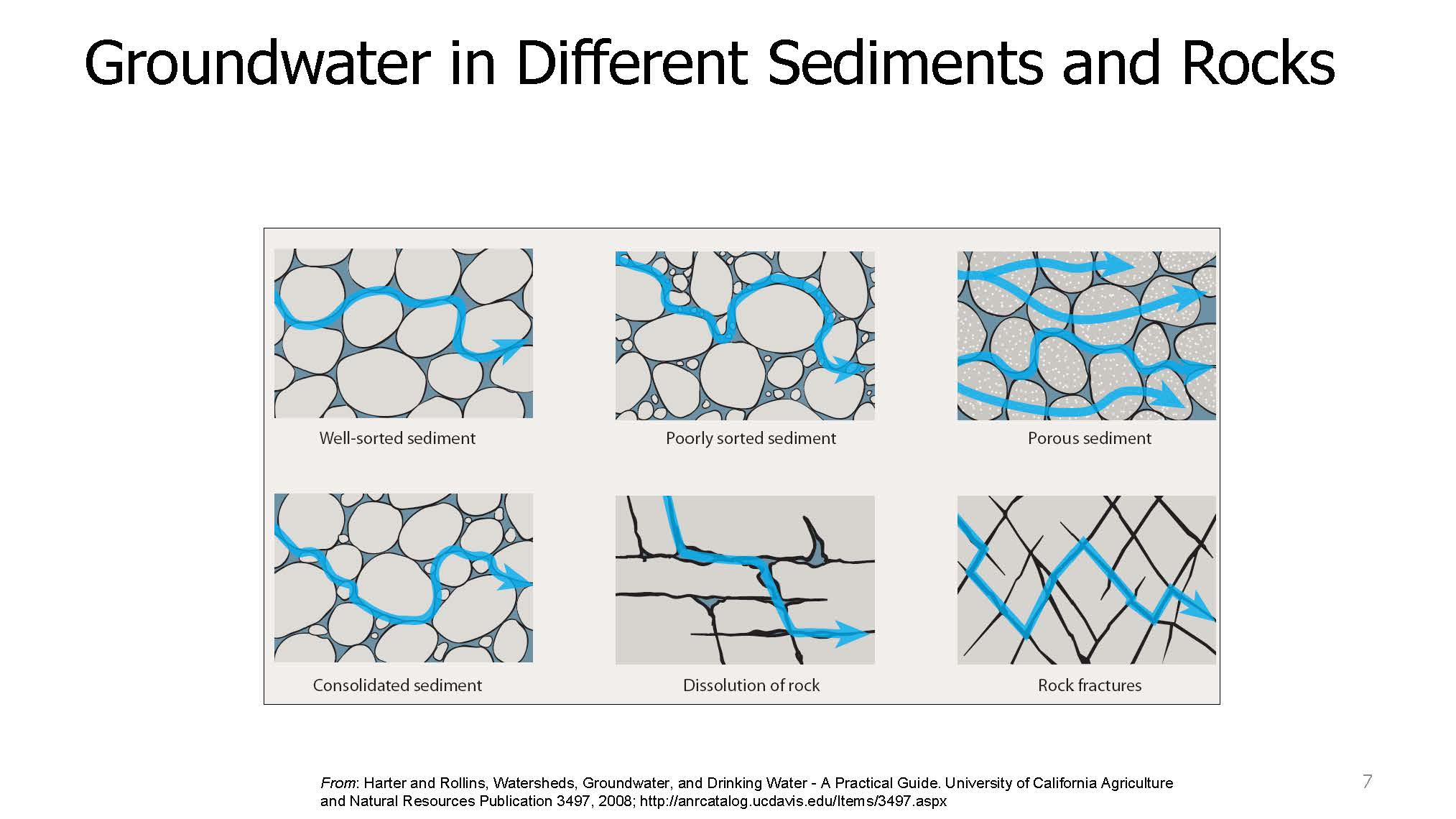 The materials in the ground can have many different shapes and forms, such as loose materials with a lot of pore space, hard rocks that are fractured and filled with water, or even material that itself is porous and has a secondary porosity that also fills with water. 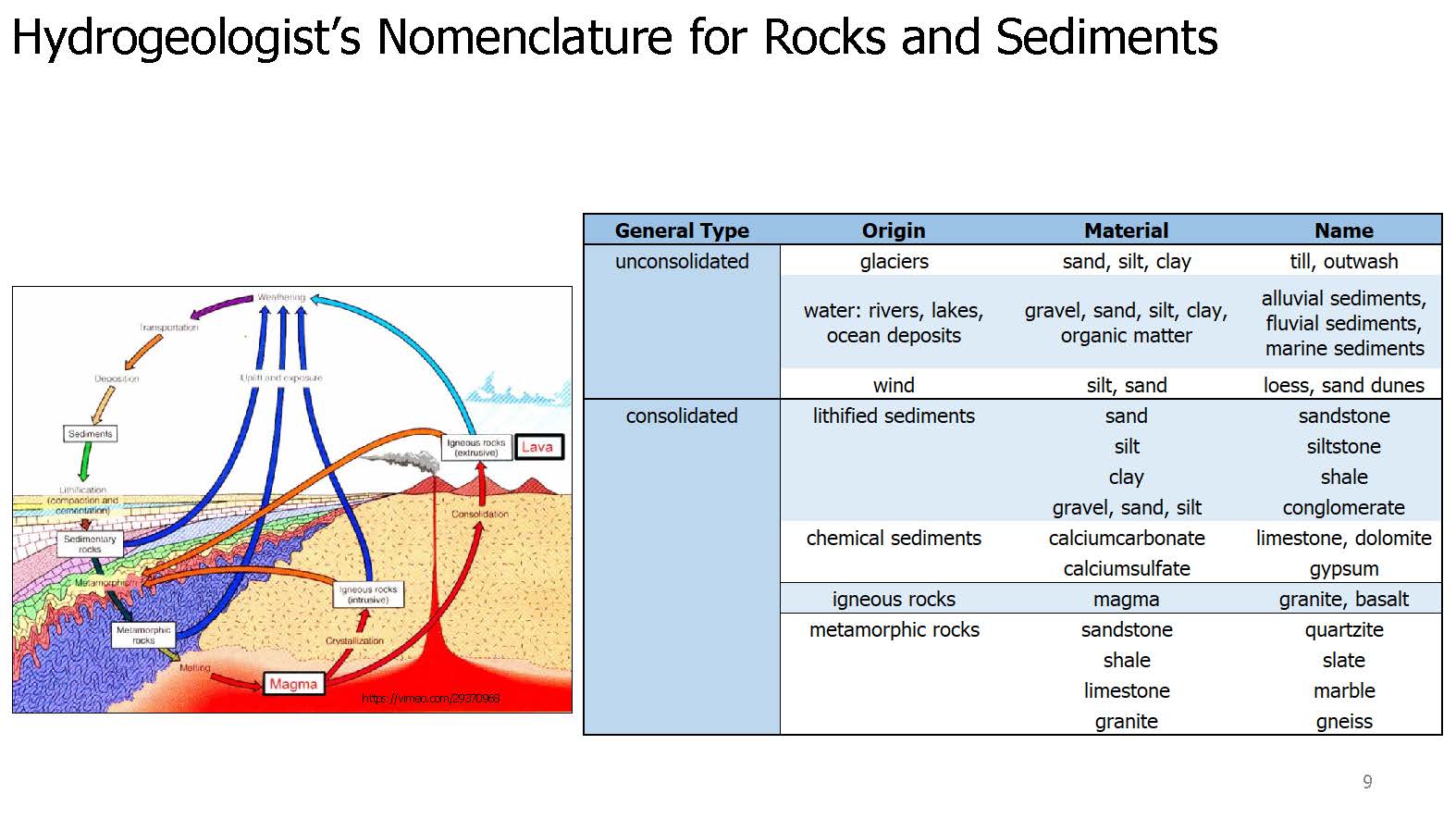 Since all groundwater moves in the subsurface, a little understanding of geology is helpful.  The geology of the basin is made up of some of the materials shown on the slide.

There is liquid magma deep in the subsurface where it’s too hot for any water to be in liquid form.  The magma cools downs and form rocks or comes up from below and forms volcanoes.   The rocks and volcanoes become eroded, the material that settles down makes new sediments that get buried, and then become rocks themselves which are called sedimentary rocks.  Under the influence of pressure form the overburden and the heat from the subsurface, these rocks may actually reform into other rocks and minerals which are called metamorphic rocks.

The table shows the relation of the commonly used names for rocks to where they came from, what they are, and how they got there.  For example, glaciers deposit sand, silts, and clays which are called till and outwash.  Wind deposits fine silts and the loss and smaller sands which makes sand dunes.  All of these sediments can get lithified as they are sitting in the ocean or sitting on the land and sand becomes sandstone, clay becomes shale, and a mix of gravel, sand, and silt becomes a conglomerate.

The oceans have chemical sediments, such as calcium carbonate which comprises limestone and dolomite and calcium sulfate which comprises gypsum.  Igneous rocks form from the cooling of lava; granite is magma that’s cooled underneath the land surface and basalt is magma that came to the surface as lava and cooled off very quickly.  There are also the various metamorphic rocks that changes at depths, so for example, sandstone becomes quartzite, and shale becomes slate.