Streambed scour is the mobilization/fluctuations in the vertical postition of the bed of a stream as material is eroded and degrades. Some degree of streambed fluctuation is natural process within gravel-bedded rivers, however due to land modifications, decades of flood suppression and floodplain encroachment have resulted in excessive channel incision or bed lowering of the Napa River system during larger flow events. Salmonoid spawning success requires that deep scour of the bed does not occur during the time the eggs are incubating in gravel deposits (or redds). Additionally, channel incision contributes to excess production and downstream accumulation of fine sediment. This fine sediment buries salmonid redds that ideally consist of coarse gravel to protect the eggs while maintaining proper water flow and oxygen.

Reduction in streambed scour during elevated flow conditions to improve salmonid spawning habitat is a primary goal of the Napa River Sediment TMDL. Streambed scour data are expressed in ITAS as the site/reach median scour and standard deviation. The target is site scour less than 15cm target.

The Napa River is the third largest tributary to the San Francisco/San Pablo Bay. Historically, the river supported at least three species of salmonid fish: steelhead (Oncorhynchus mykiss), coho (O. kisutch) and Chinook salmon (O. tshawytscha).Both salmon species were largely extinguished in the twentieth century, but, in the last several decades, Chinook salmon have again been observed in the basin, presumably through a process of recolonization. The successful implementation of sediment TMDL related actions are expected to directly benefit the spawning, rearing and survival of salomids within the Napa River Watershed.

The Napa River Sediment TMDL goals explicitly link the desired reduction of sediment loads delivered to the Napa River streams to the quality and extent of viable salmonid habitat to support rearing, migration and spawning. Elevated chronic sources of sediment to the streams from stream bank and channel erosion, unpaved roads and other sources have impaired the quality and extent of viable salmonid spawning habitat. It is assumed that the implementation of effective actions to reduce sediment sources will increase the distribution and quality of spawning habitat and directly result in increased salmonid populations in the wateshed.

The Napa County Resource Conservation District (RCD) conducts streambed scour monitoring at 8 locations along the mainstem Napa River. The sampling locations have been selected to represent the range of suitable salmonid spawning conditions within the Napa River system. Monitoring targets specific discharge events in the 2-5 year recurrence interval range, which represent a small range of annual peak flow events around the everage. Streambed scour is measured within selected reaches by conducting by two methods: (1) repeat topographic surveys before and after a targeted runoff event, and (2) installed scour chains placed across a stream bed to measure the change in the bed surface as a result of the runoff event. The median streambed scour measured at a specific location on a specifc day is reported in units of centimeters. The strandard deviation of the values used to calulate the site median is also reproted. For more information about the RCD's streambed scour monitoring program, contact Jonathan Koehler at jonathan@naparcd.org.

The ITAS target for streambed scour is a site median scour less than 15cm and that 100% of the sites monitored in any given year achieve that target. The 15cm target is based on a literature review of typical depths of eggs burial by Chinook salmon and a data review of average scour depths in gravel-bedded alluvial channels in sediment transport equillibrium during bankfull or small peak flow events (Napa River Basin Limiting Factor Analysis).

Future achievement of the identified streambed scour target suggests desired improvements in the Napa River bed stability and associated fish habitat. Per the TMDL, there is an expectation that effective and sutained sediemnt reduction and stream enahncement efforts conducted throughout the watershed would contribute to decreased streambed scour and improved habitat quality for salmonids. 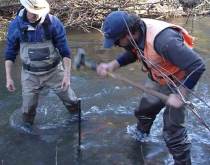